This album is the culmination of my restless curiosity of exploring the creation of interconnections and intertextualities in music. It was a journey of six years of academic research and thirty years of intimate experience with this particular organ. The goal was to recreate some of the most unusual organ repertoire of the 60s to 80s.
There is a deeper relationship between these works, besides their novelty and aesthetics. I wanted to express the extreme dichotomy of long and slow notes versus short and fast notes. Exploring the constraints with only one note, two notes to a full ten note cluster. Using non-regular rhythms that gradually accelerate and decelerate. The sum of all of this is an exercise of extreme and dichotomous nuances to achieve an end result that could please and grab the attention of any listener. The length of each work his related to Maths and Physics constants, with the appropriate rounding and margin of error. The individual movements of each cycles of works (Rrrrrrr.... by Kagel, Musica Ricercata by Ligeti and ASLSP by Cage) were chosen resorting to the I Ching, method proficiently used by John Cage.
The adaptation of each work, necessary since this repertoire was not written for a historical organ, was done meticulously using extended techniques and various materials like; fishing weights, ohashi, whistles and toys, with only one rule – no modification of the instrument. The aforementioned extended techniques are unorthodox ways of playing the organ, like the gradual opening of stops or turning off the motor that feed the bellows or using ohashi to hold the keys. These techniques are used in all the works, even if they were not necessary, bringing Ligeti's sonic expansion and way of thinking to the works of the other composers.
The improvisations were done according to La Monte Young's aesthetics and chords, the Magic chord and the Dream chord to be precise, using the same sound material and techniques mentioned before. Young's works are full of theatricality, intertwining with the humour of Kagel's works embedded in the interpretation. In Young’s verbal scores, previous preparation had to be done to interpret them on a historical organ. One need to think, literally, outside the box to perform them. The same principle was applied to the Piano Pieces for David Tudor.​
My final objective is to instil in any listener a reduced listening (term used by several authors and initiated by Pierre Schaeffer's studies) to the soundscape that I created with this instrument. 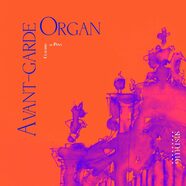 Adrian Moore: "It's amazing. You should have put a piece of Bach on just as a sense check. I keep hearing things and thinking the CD pressing didn't work... but it's the organ!!!"

Andrew Blackburn: "I have just finished listening to it, and how wonderful to hear. The technique and control of stop manipulation is sensational! I was very interested in the way you have arranged the pieces to fit the organ on which you are performing – making the seeming limitations of manuals and stops a very positive advantage. That is great. Thank you so much for thinking to send it to me: I loved hearing the music performed so well. Congratulations – it will be an important part of your PhD and in many ways is a worthy submission in its own right."
​
Barry Truax: "Thanks for the CD. It’s very adventuresome of you to do this, as it’s not an easy repertoire to bring off."

Dominik Susteck: "Dear Claudio, thanks a lot for your CD – I just listen right now to it – Very inspiring! – Kind of improvisation about some works? I like it!"

Jim Dalton: " I have been enjoying it very much. Excellent choice of repertoire and wonderful playing!"

“Vanguards and revolutions in an 18th century organ” in the Scherzo magazine:
Ismael G. Cabral: "Last July, the Portuguese organist Cláudio de Pina gave a conference entitled Extended techniques on the pipe organ at the NOVA University in Lisbon , almost a parallel activity to the presentation of the album Avant-Garde Organ that occupies these lines. In this way, De Pina joins a generous list of organists specialized in the contemporary repertoire and which currently includes Dominik Susteck and Eckhard Manz as two of the most seasoned representatives of this practice.
Holder of the historic organ of the Parish of Ajuda, in Lisbon, the investigative practice of the Portuguese musician is twofold; He not only documents in this album a collection of pieces with a clear experimental pretense, he also does so using an old eighteenth-century instrument, linguistically more associated with past repertoires. An organ in the antipodes, for example, of the imposing instrument recently built in the Church of San Martin, in Kassel (Germany), specifically designed for the interpretation of contemporary music. Not for this reason, this one that is presented to us, less valid.
The proposal of this album has a markedly didactic vocation, De Pina associates his name with that of a handful of composers perfectly linked, in the global imaginary of the music fan, to the label of revolutionary. That going ahead of the rest that defines a term of bellicose conception is substantiated, from the beginning, with the works of La Monte Young (1935). Opening the album with the music of the North American radical is a declaration of intent and a marked defense of an unexplored repertoire, almost phonographically virgin. Composition 1960 #7 proposes the execution of two notes (B and F sharp) with a single instruction: “Hold them for a long time”. Even more conceptual is Composition 1960 #10: “Draw a line and follow it”; score that has been widely approached from the field of gestural performance and, not so much, from sound praxis. Finally, in Composition 1960 #13 , the author of The well tuned piano asks the interpreter to prepare any composition and interpret it to the best of his ability. In this case, De Pina chooses to approach a very singular timbral reading (due to the very characteristics of the instrument, close in sonority to roller or Barbary organs) of four movements from György Ligeti's Musica Ricercata (1923-2006).
Organ2/ASLSP (1987) by John Cage (1912-1992) continues to underline the luminous and provocative tone of these pieces. Considered one of the longest scores ever written, Claudio de Pina offers just a sample, just over seven minutes that portray the inventor and best musician Cage also as a precursor of what a few years later would come to be called drone music (and that musicians like Pauline Oliveros and Phill Niblock would practice with outstanding results). With the two Studies by Ligeti, Ajuda's organ is given the chance to show off how well the air flows through its ancient tubes; They are pieces that require a generous and well-solved manipulation of registers with an unusual timbre in this repertoire.
Mauricio Kagel (1931-2008) devoted stimulating attention to the organ, always swinging, as was his rule, between severity and humor. The first is documented in General Bass (1972), a cavernous curiosity, and the second in Rrrrrrr...: Orgelstücke (1980), a collection from which a piece is extracted here that uses extended techniques with the resource of various objects and that imitates the constipated (!) song of a bird. “This work consists of little eddies in the middle of the ocean,” Young writes as the only hint on the score to Composition 1960 #15 , allowing De Pina a brief, watery transition to the album's well-considered conclusion, the piece (not ) silent by John Cage, 4'33'', which the organist spins, more than with the musical history of the avant-garde, with the sacred space that Ajuda's organ occupies: “When he opened the seventh seal, there was silence in heaven”. Later, with the player off, we will have to assimilate the journey, if at some point our ears are left behind, it will only be a matter of starting over, until we manage to get ahead of these old music that shine surprisingly new."

You can read the critical review and listen to the podcast in Vital Weekly #1353  here:
http://www.vitalweekly.net/1353.html
Frans de Waard: "De Pina is a composer and organist, and on the 18th-century historical organ at Parish of Ajuda, he performed several works from modern composers. Works that aren't necessarily for organ; or, perhaps, for any instrument. Works by La Monte Young, György Ligeti, Mauricio Kagel and John Cage. Works of a more conceptual nature, such as Young's 'Composition 1960, No. 7', which is two notes and the instruction reads that these notes are 'to be held for a long time. The church organ, with its various instruments, allows for richness, even if it's only two notes. I am not fully knowledgeable about all these works (and, while on the subject, Vital Weekly is not your go-to website for modern classical music), but with my limited know-how, I enjoyed these pieces. You can download a booklet via a QR code with some explanation, and I learned about Ligeti's pieces, which sounded great in all their quietness. The same goes for Kagel's 'General Bass'. I was less enamoured by his 'Rrrrrrr… Orgelstücke: I. Raga — VIII. Rossignols enrhumés'. I would think that even if you don't know or care too much about modern music, this release could still appeal to you, providing you love church organs and drone sounds, which goes for both in my case."

You can read the critical review in Relatório Minoritário, 2022  (Sábado magazine):
Nuno Rogeiro: "Cláudio de Pina, at the controls of the superb eighteenth-century Ajuda organ (by Machado and Cerveira), invests in the most difficult: 20th-century avant-garde composers, such as La Monte Young, Ligeti, Kagel and Cage. Beautiful, intense and intriguing. I missed Messiaen and Krenek​."

You can read the critical review in Trybuna-Muzyki-Spontaniczna:
https://spontaneousmusictribune.blogspot.com/2022/11/the-lisbon-story-attic-joao-lencastre.html?m=1
Andrzej Nowak: "At the end of the Lisbon mini-collection, the works of the above-mentioned classics of minimalism performed on the organ and equipped with a whole lot of sounds that accompanied the playing of a large pipe instrument. So, there are the sounds of the chair creaking, the closing and opening of the door, also the movement of the musician, and maybe not only him. These additional sound effects are especially noticeable during the performance of Cage's 4'33'', the score of which, as we all know, is a blank page. This passage of post-sacred field recordings is crowned by the whole concert, which seems to be one sequence of cause and effect, successive sounds of the instrument and the environment.
At the beginning, the musician offers us La Monte Young's compositions. A dull, dreamy atmosphere, but also a lot of action in a unit of time, at least for the canons of the master of minimalism. Long phrases flow here both bottom and top, they seem to be sublime, but also a bit slapstick. The artist also offers us a lot of games with silence, which he saturates with the sounds of the environment. However, if we are looking for the true face of minimalism at a concert, it is provided by a fragment using Ligeti's compositions. The sounds seem to stand still here and wait for certain death. Here is a narrative that encourages deep listening and extreme focus. In Kagel's part, we get a whole galaxy of short, almost abrupt phrases. Here, too, the fauna and flora of the organ's surroundings contribute more phonic events to the narrative than the instrument itself. In Cage's part there is more life, but also dark, even gloomy climates. Also filigree phrases and a surprising ethno flavor. Before the concert enters the final phase of Cage's soundlessness, the artist serves us a slight return to Young. Here, in turn, we have a rush that the organ sings passionately."

​I want to publicly thank the people involved in this project: And last but not least, Dominik Susteck and Andrew Blackburn for their inspiration and contribution to this field.
​Quoting Newton, it is a privilege to stand on the shoulders of giants.