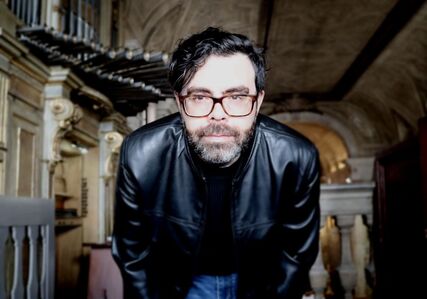 Cláudio de Pina is a multi-talented sound artist, composer, improviser, organist, and academic researcher. He has amassed more than three decades of expertise in a wide range of music-related fields, including keyboard instruments, synthesis, acoustics, sound engineering, musical production, and computer music programming. With a scientifically-informed approach to music, Cláudio has honed a diverse set of skills in producing, recording, editing, and composing.
​
Since the 1990s, he has worked as a freelance artist and producer under the pseudonym Adam Nox, collaborating with numerous groups and studios including The Temple, Forgotten Suns, Icon & The Black Roses, Fantasy Opus, Gilbert's Feed Band, Organoide, and more. He established his own studio, Centro Oitava, in 2014. In recent years, he has dedicated himself to contemporary music, especially organ and acousmatic music. He is the titular organist of the historical organ at the Parish of Ajuda and is a researcher in the Contemporary Music Research Group (CESEM).​
Over the past decade, Cláudio's artistic and academic output has been devoted to contemporary music, with a particular focus on organ and acousmatic music. He holds a diploma in Advanced Studies in Musical Arts, with a specialisation in organ and contemporary music, and is a master in Musical Arts, having been distinguished with the Dean's Honour Roll in 2018. He is currently a PhD candidate and FCT research fellow in the field of contemporary organ and electroacoustic music, studying at the Nova University (ESML/FCSH). He has also studied at the Gregorian Institute of Lisbon, Hot Jazz Club, and the Physics Engineering program at Lisbon University (FCUL), and has received further instruction from renowned personalities such as Adrian Moore, Åke Parmerud, Annette Vande Gorne, Barry Truax, César Viana, Eurico Carrapatoso, Gilles Gobeil, Hans Tutschku, Jaime Reis, Vincent Debut, and Trevor Wishart, amongst many others.

Cláudio's scientific output covers a wide range of subjects, including musical analysis, musical composition, electroacoustic music, acoustics, sound synthesis, organ performance, and soundscape. His artistic work has been selected and premiered at international events, including Arte no Tempo, Aveiro Síntese, Binaural Nodar, Festival DME, Festival Zeppelin, Iklectic, MUSLAB, MA/IN, Lisboa Incomum, L'Espace du Son, Perspectivas Sonoras, and the World Listening Project. He has also been a finalist in the MA/IN and Métamorphoses composition contests, and his acousmatic works have been published in the MA/IN 2019 and Métamorphoses 2020 releases. He has released two albums, Asteroeidēs, which features organ music with electronics, and Palimpsestus, an album of acousmatic music. In 2022, he released his debut solo album, Avant-Garde Organ, which was a critical edition of vanguard organ works performed on a historical Portuguese organ. The album was funded by the GDA Foundation, with the support of CESEM, the Culture Ministry of Portugal, and was published by 9 Musas.

In conclusion, de Pina is a talented and innovative sound artist and researcher who has dedicated his life to exploring the boundaries of music and pushing the limits of what is possible. His extensive academic and artistic background, combined with his passion for innovation and experimentation, has resulted in a unique and diverse body of work that has been recognized and celebrated worldwide.

Artist Statement
My artistic output reflects a lifelong pursuit of amassing musical and scientific knowledge paired with critical experimentation. Building from a strong foundation in a vast range of science and musical disciplines, I continued to push the boundaries and create innovative works that draw upon a wide spectrum of musical styles, academia research and unusual techniques. I am committed to explore the sonic possibilities of music and using my artistic practice to shed new light on the relationship between sound, technology, performance and the human experience. Ironically, "audio" is included in my name!